It’s been nearly half a century since the end of Alabama’s Tuskegee experiment, the infamous 40-year study in which the U.S. government intentionally gave 399 syphilis-infected black men useless placebos — like aspirin and mineral supplements — instead of penicillin, which could have cured them.

Pfizer, with the help of the Sickle Cell Disease Association of America, is trying to change that.

The New York-based pharma giant, which is now recruiting for its own clinical trials in sickle cell disease, recently launched oneSCDvoice, a collaborative digital platform aimed at educating and lending emotional support to people with SCD. 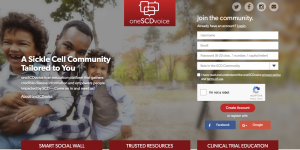 “Pfizer has been working with the sickle cell community for over five years,” said Mary Ellen Carroll, the company’s director of global marketing for sickle cell disease. “We’ve learned that there are lots of advocates and advocacy organizations, but oftentimes they don’t know what the other is doing.

“They also have access to educational materials, but these aren’t always up to date. The goal of this platform is to empower patients to be able to self-advocate and connect all the different community members,” she said.

Sickle cell disease affects millions of people worldwide, including an estimated 100,000 in the United States. About one in 13 African-American babies is born with sickle cell trait, which happens when a person inherits just one sickle cell gene from a parent.

She said the new digital platform, launched in January with support from Pfizer, consists of three modules: trusted resources, a “smart” social wall, and a clinical trial educator.

“What’s unique about that social wall is that it’s like a smart Facebook page. Conversation goes on, but the software pulls resources from the library and integrates them into the conversation,” Carroll said. “And the clinical trial educator focuses on the importance of clinical trials to the drug development process, debunking some of the myths associated with the African-American community about clinical trials.”

Pfizer created a coalition of external advisers who helped curate the website’s content, and a working group of patient advocates who could generate awareness.

“The third group is community managers, who make sure people who had a question were pointed to the right resource. They also helped maintain a positive interaction within the community,” Carroll said. “We started with the community, and the community shaped this.”

One advocate who’s solidly behind the Pfizer initiative is TaLana Hughes, executive director of the Chicago-based Sickle Cell Disease Association of Illinois. Her 15-year-old daughter is one of about 5,000 people with SCD in the state of Illinois, which added the disease to its newborn screening panel in 1989.

Hughes said that each year, about 85 infants test positive for abnormal sickling conditions in Illinois. Her organization offers various patient and family services, as well as education, counseling, and self-management workshops.

“My child does not have many options,” she said. “There are only two FDA-approved drugs for sickle cell, and one was approved only last year. But if you go to the hospital and you aren’t on either one of those, you’re kind of frowned upon.” 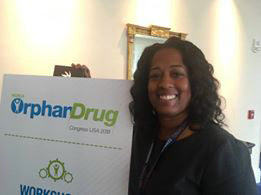 Hydroxyurea, the long-approved U.S. Food and Drug Administration treatment, has been on the market for nearly 20 years. This therapy helps red blood cells to stay round and flexible, which can help reduce complications. Common side effects of hydroxyurea include low blood counts, gastrointestinal symptoms, and loss of appetite.

In July 2017, the FDA approved Endari (L-glutamine oral powder; Emmaus Life Sciences) to reduce acute complications of sickle cell disease, including the frequency of sudden, severe attacks of pain. It is available for patients 5 and older, and common side effects include constipation, nausea, headache, abdominal pain, cough, pain in the extremities, back pain, and chest pain.

“Not everyone can have a bone marrow transplant, either,” Hughes said. “My daughter with SCD has two siblings who are perfect matches for each other, but neither one of them is a match for her.”

For this reason, she urges patients to overcome their traditional fears and sign up for clinical trials.

“Until more African-Americans participate in clinical trials and assist in the process of drug development, we will continue to have only two FDA-approved drugs for sickle cell disease,” she said. “I see the value in partnering with pharmaceutical companies, because really it is our only hope.”

But not everyone has access to the internet or uses it regularly, Hughes said.

“There’s still a large community of people who aren’t online … So it’s up to us to print stuff up and mail it out,” she said. “At some point, most sickle cell patients are going to the hospital, so we try to have partnerships with doctors and nurses who will hopefully link these individuals to our organization.”

Similar efforts are underway across the country.

Mary Bentley LaMar heads the Newark-based Sickle Cell Association of New Jersey. She said her state is home to about 6,000 sickle cell patients, of whom 500 to 700 interact with the association in any given year.

“The Tuskegee experiments, in which black men were experimented on for syphilis and left untreated, caused deep mistrust,” LaMar said. “There are other instances throughout history when individuals have been used for study purposes without their consent, such as Henrietta Lacks of Baltimore, whose cells were used for research without her permission. Given this past, African-Americans can be suspicious when someone wants to engage them in a clinical trial.”

“The Immortal Life of Henrietta Lacks” — the great-great-granddaughter of a slave whose harvested cells were at the core of treatments for Parkinson’s, hemophilia, herpes, influenza, and other diseases — was recently made into an HBO movie starring Oprah Winfrey.

But since the 1950s, many protections have been put in place, LaMar said. “So I think it’s our job as a community-based organization to let individuals know what the protocols are, and what informed consent means.”

LaMar started the nonprofit agency because “New Jersey was lacking in terms or a community-based approach” to SCD, she said. She and two other staffers work with a team of volunteers. The association also partners with black churches, fraternities, sororities, and civic organizations, as well as with community groups across the Garden State.

“Sickle cell is not just a black disease,” she said. “Over thousands of years, it was the body’s way of protecting itself against malaria. So if you look at wherever in the world malaria is prevalent, that’s where sickle cell disease is prevalent, too.”